Percy Shelley was kind of a dick.

As you’re aware by now, the Jekyll and Hyde Pub is frequented by a number of tortured geniuses. About a month back, Percy Shelley is stumbling around the place, trying to bum pints. Turns out Daddy, Sir Thomas, had cut off his allowance. Though that’s certainly not the most moving sob story, we throw him a bone. We tell him about the (post-)apocalyptic issue of Penny Dreadnought we’re about to publish, and that he can contribute a poem.

After reading our stories, he whips up “Ozymandias” right there. We‘re like, “Okay, that’s pretty good,” and he drinks on us for the rest of the evening.

He stumbles out of the pub and back into his own time, and publishes the poem 200 years ago, selling first rights twice and leaving us no recourse but to take our revenge on his cremated remains (the details of which can’t be described in polite company).

Anyway, we paid for it, and we’re going to use it.

I met a traveller from an antique land
Who said:—Two vast and trunkless legs of stone
Stand in the desert. Near them on the sand,
Half sunk, a shatter'd visage lies, whose frown
And wrinkled lip and sneer of cold command
Tell that its sculptor well those passions read
Which yet survive, stamp'd on these lifeless things,
The hand that mock'd them and the heart that fed.
And on the pedestal these words appear:
"My name is Ozymandias, king of kings:
Look on my works, ye mighty, and despair!"
Nothing beside remains: round the decay
Of that colossal wreck, boundless and bare,
The lone and level sands stretch far away.
Posted by Unknown at 1:45 PM No comments:

The Lone and Level Sands 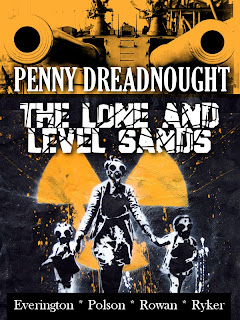 The Abominable Gentlemen build four worlds only to destroy them in this apocalypse-themed issue of Penny Dreadnought. Witness four unique visions of the end in:
“Precious Metal” by Aaron Polson
“Only the Lonely” by Iain Rowan
“The New Words” by Alan Ryker
“He” by James Everington


Penny Dreadnought: The Lone and Level Sands is 20,000 words, or approximately 80 pages. Buy it at:
Amazon / UK
Barnes & Noble
Smashwords

Posted by Unknown at 3:12 PM No comments:

The Man With A Skull For A Head Interviews #4: James Everington 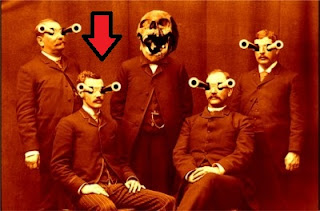 The last interview of the night was conduced by The Man With A Skull For A Head in an almost deserted back-room of the Jekyll and Hyde (a pub which has stuck to the fine tradition of the 'lock in' despite the change to licensing laws making it obsolete everywhere else).


The final victim was James Everington. Some regulars in the Jekyll and Hyde say the The Man With A Skull For A Head can't actually talk at all (lacking vocal chords as he does) and that Everington was in fact just asking questions of himself in a silly, put on voice. The Abominable Gentleman of course vigorously denies such a charge.


JE: As a Nottingham lad I'll have to say Robin Hood - I love the fact that the local government flies flags all over the place to someone who was basically a socialist terrorist. I think the Occupy movement has really missed a trick adopting V For Vendetta as their unofficial mask of choice (great though V is). I mean here was a guy whose motto was "rob the rich to help the poor.... and fill the tax-dodging bastards with arrows if they refuse."


I guess there are unpleasant associations with Kevin Costner and leggings, though.


JE: I once tripped up Timmy Mallet at a train-station. He almost fell onto the tracks right in front of a oncoming train arriving at the platform. It was probably the closest to death he's ever been. This was in his post-Wacaday career lull. (Non-UK readers may have no idea who Timmy Mallet is - for the sake of your sanity don't search for clips of him on You Tube.)


Serendipitously I've just noticed from his Wikipedia page that Mr. Mallet went to school in Hyde. How "utterly brilliant!"


TMWASFAH: "If you had a free pick from all of literature of one story by a guest author for a future issue of Penny Dreadnought, what would it be?"


JE: The Scarlatti Tilt by Richard Brautigan. A title and two sentences, and a better story than most of us will ever achieve in this life time.


JE: James Everington, author of The Scarlatti Tilt and other stories, robbed those tax-dodging bastards at arrow-point, gave the money to the poor, got the girl, tripped Timmy Mallet over at a railway station near Hyde, and still managed to get to the pub in time for Iain Rowan's round.


TMWASFAH: "What one thing would you like to know about the other Abominable Gentlemen that you currently don't?"


JE: What are you drinking?

TMWASFAH: "What one book of yours would you like to plug to the Penny Dreadnought readership?"


JE: The Other Room is a collection of my 'weird fiction', although it does not contain The Scarlatti Tilt. If you buy it and are rich I promise to give the proceeds to the poor without perpetrating any arrow-related crime on you.


Timmy Mallet, if you are reading this, I probably owe you a free copy. Get in touch.


Buy The Other Room at Amazon: US | UK
Posted by James Everington at 11:31 AM No comments: