The Abominable Gentlemen have been busy in the lab again, and after much boiling of test-tubes and loss of eyebrows, I am pleased to say that fourth volumes of Penny Dreadnought is available now. 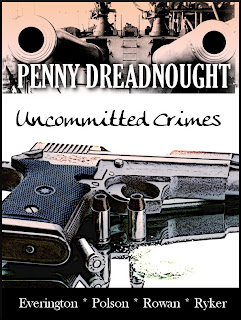 This issue's honorary Gentlemen is Theodor W. Adorno, whose quote “Behind every work of art lies an uncommitted crime” was the inspiration for the title. That was my idea; I'm the Abominable Gentlemen who brings unnecessary pretentiousness to the group.

The issue contains four tales of murder, malfeasance and malarky:

Commit your own crime by downloading it from Amazon (UK | US), Barnes & Noble, or Smashwords.

Posted by James Everington at 9:48 AM