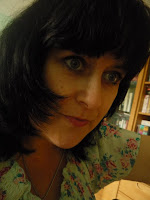 The Abominable Gentlemen are always looking for exceptionally talented weird fiction authors, and luckily earlier this week the amazing Cate Gardner wandered into the Jekyll & Hyde pub - either drawn there by mysterious, demonic forces or because she wanted to get out of the rain.
Cate is the author of the short story collection Strange Men in Pinstripe Suits and if the title alone doesn't make you want to run out and buy it now, then you're dead to us.
Naturally she was beckoned over for a chin-wag, and this was the result:
What are you drinking?
Maybe something non-alcoholic (and low calorie) or maybe a pint of rum and coke, heavy on the rum - it all depends on whether I'm Jekyll or Hyde. I hope I'm Hyde.
Introduce yourself - as writers, we often get asked for boring factual author bios. If you could write an author bio unconstrained by the boundaries of reality and truth, what would it say?
My name is Cate, which is short for Catherine the Terrible and I live in a hut at the bottom of the garden with a short hairy man called The Wolf Dude and a skeletal bloke known to regular folk as the Grim Reaper.
My novellas have graced the hands of the famous (I dug up Charles Dickens and I've also dropped my books into the lap of Tim Burton - quite a feat when you consider I was flying over his garden in a hot air balloon). My short story collection is currently available on Pluto thanks to a gust of wind and an adventurous postman wearing a space suit he picked up in a fancy dress shop. Forthcoming stories will appear on all laptops and computers, possibly even some television screens, once the Gremlins in my employ have figured out how to hack the satellites. Watch this space.
If you had a Mister Hyde style alter-ego what would he/she be called and why?
Oh my, I guess by this question you are assuming that I am Jekyll whereas I may actually be a Miss Hyde pretending to be a Miss Jekyll. In saying that I suppose I should temporarily shake off my disguise and reveal who I truly am…
I am Eugenie Primrose, a time-travelling double agent in the court of Victoria and my weapons of choice are an umbrella and poisoned lipstick.
Have you noticed how I've been three different people in the first three questions? I suspect I'm very confused.
'Literary horror' - oxymoron or your bread & butter as a writer?
Neither. Of course horror can be literary, although I doubt I am (I'll leave that up to the reader to decide).
The Penny Dreadnought art features people-with-telescopes-for-eyes. What low-tech body adornment or extension would you like?
Something to make me taller would be good. Then I could finish painting the little strip of wall above my bath. At the moment, I'm contemplating really high platform shoes or balancing on someone's shoulders. 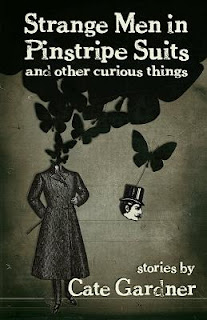 If you could make any one person - alive or dead, male or female, real or fictional - an honorary Abominable Gentleman, who would it be and why?
Oscar Wilde for his wit, his dress sense and his fabulous hair.
Let's bitch - we partially came up with the idea of Penny Dreadnought in reaction to a lot of the 'sparkly vampire' school of supernatural writing. What about writing or publishing today makes you want to scream?
I don't think anything makes me want to scream but that's a rather boring reply. Ooh, I do have something. I want to scream every time someone at work asks have I read Fifty Shades of Grey and then goes on to tell me how bloody brilliant it is and I should read it. And I doubly hate that they'll then re-read that book a dozen times rather than giving another author a go.
I'm a little mad now.
Be honest - despite being a seasoned horror pro, are you actually confident you can pronounce 'Cthulhu' correctly in public?
Until I heard the word spoken in an episode of Supernatural (season 6, I think), I was saying it completely wrong. And no, I'm not confident I could pronounce it correctly, but I'll admit I also don't really care about Cthulhu. I'm not a Lovecraft fan. (Should I get my coat now?)
What's the most abominable thing you've done that you want to reveal to the internet at large?
Now if I don't answer this question you're going to think I have something to hide. Thus, I shan't answer the question.
The third issue of Penny Dreadnought is about the world ending. What's your favourite literary apocalypse?
I want to say 'I am Legend' by Richard Matheson, but that would be cheating because I've only watched the movies. I know! I loved 'The Forest of Hands and Teeth' by Carrie Ryan, but was less keen on the sequels so feel I shouldn't pick that. So I'll plump for 'The Road' by Cormac McCarthy.
Aliens are threatening to destroy the human race unless we can prove we are civilised enough to live. However they are short of time, and out of the entire cultural repository of the world to date, they want a single short story of your to prove we are worth not vaporising. Which story do you pick and why?
We're fucked.
I guess I should pick Empty Box Motel because it’s a sad little tale and the aliens will be too busy wiping their eyes and blowing their noses to kill us all. They may still vaporise me though.