Foreword to Volume 2 of Penny Dreadnought... 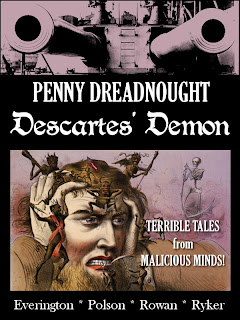 Imagine you are talking to someone at a party and you don't know if they are telling the truth or lying. Something isn't quite right about what they are saying, but you can't put your finger on any obvious falsehood. Feeling uneasy, you want to leave them and talk to someone else, but you can't just walk away. In some ways it is worse than if you knew they were lying - at least if you knew you could call them on it. It's the doubt that puts you on edge.

What if you weren't sure if the whole of reality was a lie?

The theme of this second collection of Penny Dreadnought is 'epistemic doubt'. (When we agreed on this theme it made me proud to be one of the Abominable Gentleman, by the way. Any normal group of horror writers would have picked a nice obvious - and commercial - theme like romantically inclined vampires. But oh no, not us.) 'Epistemic' just means how we know things, and really there's only one way - through our senses. Which can deceive us. Or be deceived.

Descartes mused along these lines once, wondering what he could know with absolute certainty. He imagined a demon with infinite powers, bent on deceiving him in every way. Everything he'd ever seen, or remembered seeing, might have been a manipulation of this demon rather than something real. Nothing was certain, everything was at doubt (except Descartes himself - if the demon was manipulating his very thoughts he still had to exist to have those thoughts - hence "I think therefore I am"). And how could such a thing be conclusively ruled out? Descartes was definitely an Abominable Gentleman.

Scary, no? And fertile soil from which to grow horror stories. Implicitly or explicitly, the stories in this volume of Penny Dreadnought  make you question just what is real or not in their own particular fictional universes. And like the smiling but scary man talking to you at a party,  they don't give the game away either.

The modern equivalent is of Descartes is to wonder if everything we've ever experienced isn't the product of some Matrix-like computer program, rather than actually real. Although we don't have the computer power to simulate a reality in such a way yet, there isn't any theoretical reason why it couldn't be done in the future. And if we can do it one day, we probably will. Many times in fact. Indeed some modern day descendents of Descartes have reasoned that, if there are likely to be more artificial realities than real ones, it is statistically likely that we are in one right now...

You aren't in fact about to start reading the second issue of Penny Dreadnought at all, but just being tricked into thinking you are by a sadistic computer programmer or by Descartes demon.

But thank you for buying it, just the same.