The Man With A Skull For A Head Interviews #3: Aaron Polson 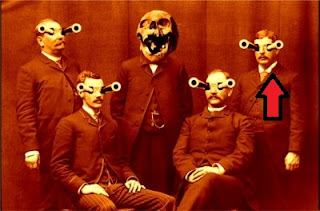 Later that same evening, The Man The Man With A Skull For A Head interviewed Aaron Polson - it was getting close to chucking out time at the Jeykll and Hyde, but obviously the Abominable Gentlemen are in cahoots with the barman, and an old-fashioned 'lock in' is theirs upon request...so there's never any need for them to stop drinking Blue Monkey if they don't wish to.

This may explain a lot.

AP: Without going the obvious "H.P. Lovecraft" / "Edgar Allan Poe" route, I'm going to say Charles Darwin. While not a fiction writer, that dude was really thinking out of the box.

I'm ashamed of this one--and it amounts to theft as well as "murder"--I pulled fish from a tank at a discount store when I was five or six. I liked the way they felt in my hand: squish and wet. When I heard footsteps, I dropped the poor little guy (a goldfish, I think), and it suffocated on the white tile floor.

If I had an alter-ego? I thought I was the alter ego... My alter-ego would probably have a nice, safe name like "Bob Jones" or something. Either that or Pleather Tuxedo (after the fictional girl band "Leather Tuscadero and the Suedes" from TV's Happy Days.


TMWASFAH:  "If you had a free pick from all of literature of one story by a guest author for a future issue of Penny Dreadnought, what would it be?"

"Greasy Lake" by T. Coraghessan Boyle would be my first pick. Man I love that story--great voice, great imagery, and a mossy, waterlogged corpse. It speaks to my growing up in middle America, too. H.P. Lovecraft's "The Rats in the Walls" comes in a close second. The "big reveal" in "Rats" still gives me chills, and I've read it ten+ times.

I'd say that I'm made of marshmallow fluff and branches from a willow tree with an I.Q. of 134. I could go higher on the I.Q., but why get cocky?

TMWASFAH: "What one thing would you like to know about one of the other Abominable Gentlemen that you currently don't?"

Peanut butter: do you believe it's more peanut or more butter?

TMWASFAH: "What one book of yours would you like to plug to the Penny Dreadnought   readership?"

I'd love for more folks to read Loathsome, Dark and Deep (Amazon US | UK). I loved writing that book and it's garnered some decent reviews. I think it would make a nice film, too. (wink, wink)

Posted by James Everington at 6:00 PM